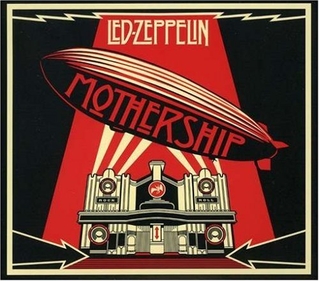 Led Zeppelin were never much of a singles band: From 1969 on, guitarist Jimmy Page was adamant that the group's LPs not be mucked up with filler, so most of their releases contain only between eight and 10 tracks. Led Zeppelin's legacy so significantly shaped the next four decades of rock'n'roll and heavy metal that to further discount any one of those tracks seemed brash, negligent, or stupid. Twelve years of intense self-editing meant that Led Zeppelin required no best-of. Anyone truly interested in their music was advised to dig through their couch cushions until they came up with enough quarters to invest in one (or all) of the band's albums: It would be worth every penny.

Mothership-- a collection of 24 of Led Zeppelin's "greatest hits," remastered and selected by the band's three remaining members (Page, as well as Robert Plant and John Paul Jones)-- might be conceptually flawed, but it's hard to argue against songs as indisputably great as these. Mothership is not the first time Page has participated in the distillation of his own work: In 1990, a decade after John Bonham downed his last shot of vodka, Page curated an eponymous boxset (known, in fan parlance, as Crop Circles) which saw their eight-album discography distilled to four perfect CDs. And in 2002, Atlantic released Early Days and Latter Days: Volumes 1 and 2 (each previously available as a single purchase, in 1999 and 2000, respectively), a Page-condoned collection of 23 tracks which awesomely featured all four members of Led Zeppelin on the cover, dressed in giant American space suits and perched casually in front of an illustrated moonscape. Early Days and Latter Days has a tracklist similar to Mothership (the latter adds "D'yer Mak'er", "Over the Hills and Far Away", "Heartbreaker", and "Ramble On", but loses "Ten Years Gone", "What Is and What Should Never Be", and "The Battle of Evermore") so, clearly, the idea of Led Zeppelin's greatest hits is contentious even for the band itself.

Fans will probably argue over Led Zeppelin's selections-- omitting "What Is and What Should Never Be" feels unforgivable-- and it seems obvious that Page, Plant, and Jones were striving hard to represent every last phase of their career: Some work from the band's crucial 1969-1975 era is sacrificed for late-career tokens like the comparably-mediocre "In The Evening" (itself a curious selection, given the relative popularity of In Through the Out Door's "Fool in the Rain", which was the band's last release to make the pop single charts). Still, content-critiquing aside, the remastering on Mothership is no small achievement, and it sounds revelatory on even the shittiest stereos. Check Bonham's pitter-pattering in the verses of "Ramble On", or the still-intact fuzz at the top of "Immigrant Song", or the tiny percussive "fwwpts" on "D'yer Mak'er", or the restored outro to "Over the Hills and Far Away". Twist your volume knob heavenward and embrace Plant's inescapable geekiness, yelping about Gollum and Mordor; chug booze and air-drum with John Bonham: Led Zeppelin sound as tremendous in 2007 as they did in 1972.

Mothership offers no bonus content or previously unreleased material. It serves, mainly, as an introduction for those (presumably out of classic rock radio range) still unfamiliar with the band. Longtime fans will find little of use here, although anyone who spends a couple hours with Mothership will find themselves duly reminded that Led Zeppelin are quite possibly the finest rock band of all time.