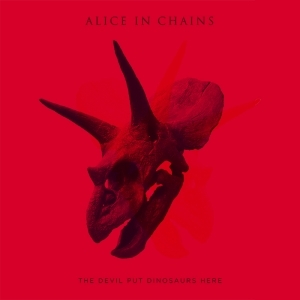 We used to dread our favorite bands reuniting, which says a lot about either diminishing returns or our faith in the people we decide are geniuses. That goes fivefold when one of the band's geniuses is dead. Being post-Spinal Tap (and post-Behind the Music) has given the alt-generation both hindsight and foresight — Archers of Loaf and Pixies and Mission of Burma and Dinosaur Jr. have not worried about how to sound like themselves again. With Portishead's Third and My Bloody Valentine's more recent m b v, we can even acknowledge the possibility that a band might hit one out of the park again ten or 20 years past its alleged peak. But watching how, say, Jefferson Starship or Smashing Pumpkins caught flak, most bands making a second go have merely resigned themselves to the promise of Not Sucking.

But with that, another problem has developed — upholding a brand. And get this straight: No band has ever sounded like Alice in Chains. Yes, we remember Days of the New; consider yourselves lucky you don't remember the plainly offensive Dust for Life. But somehow, Nirvana has avoided blame for Puddle of Mudd, while AIC totem Layne Staley supposedly died for Godsmack's sins. These Seattle knuckle-draggers are credited with setting the bar for nü-grunge's extra-crunchy guitar tone, but no band has or could replace guitarist and co-writer Jerry Cantrell's seasick harmonies, drummer Sean Kinney's off-beats, or Staley's wailing, no-walls weirdness. Where is Godsmack's talkbox solo over acoustic guitar or Seether's Claymation video, Three Days Grace's seven-minute admission that they're a goddamn "Sludge Factory"?

Commercially successful as Alice in Chains ended up, Staley didn't know how to romanticize, and he completely failed to craft a persona. If he pleaded, "You can't understand a user's mind" on 1992's mega-selling Dirt, it's because he lived as he died — ten years later, in the throes of a horrible addiction. He broadcasted live and direct from rock bottom. It was in no way a sustainable business model — just an uncommon grip on perversity matched by a band that performed the miracle of a Lennon/McCartney partnership amid hole-in-the-earth ugliness. You wouldn't tell a documentarian to repeat Grizzly Man, either.

From Staley's first available song ("We Die Young") to his last ("Died"), it seems safe to assume that his demons were real, despite occasional protests like "Grind," where he bitched at the press "not to plan my funeral 'fore the body dies." No one wanted him to live up to his musical horrors, not least his band, who decided to carry on 14 years after his death with a new singer.

And so, on 2009's Black Gives Way to Blue, frontman William DuVall inhabited another man's body of work as cautiously as he could, without playing his predecessor as too ugly or too soft, debuting the radio-unfriendly, seven-minute single "A Looking in View" only as a token of weirdness to ensure that nobody claimed they were in it for the money. Except for the occasional name-diluting ballad like "Your Decision," the album was a crash dummy for how well fans would take to DuVall, who was mostly hidden inside Cantrell's familiar harmonies. Yet its only great song was its poppiest: "Check My Brain" juxtaposed a ridiculous chorus about California with all rights and oh yeahs against a quintessential Cantrell riff, just one heavy note bent to mutation.

That album now feels like a practice session for the better but flatter The Devil Put Dinosaurs Here, which has nothing as good as "Check My Brain" or as dull as "Your Decision," and genuinely wants to say something about the human condition in a post-Tumblr world, even if it's just, "Jesus don't like a queer / No problem with faith, just fear." This isn't inconsistent with Staley's legacy, since a hyphen would greatly reroute a sarcastic quip like "Clear all your sins / Get born again," and it's definite progress for a band that earlier gave us "Queen of the Rodeo" ("I ain't no queer / Go fuck a steer"). The album title comes from the idea of Satan planting fossil evidence to discourage the faithful.

Musically, we get one too-brief talkbox solo on "Lab Monkey," Cantrell's signature noise on "Pretty Done" and "Stone" (as warmly welcome as anything you'll get from Thurston Moore these days), and lots of nostalgia-triggering crunch-and-moan. "Breath on a Window" has a pretty, proggy bridge that could be at home on Unwound's Leaves Turn Inside You. But several tracks, like "Hung on a Hook" and "Low Ceiling," never break out of their creeping familiarity. The best moments feel left up to chance: "Hollow" has an epic, unsingable hook that only Cantrell and a twisted duet partner could properly nurture, while the woozy centerpiece "Lab Monkey" squeezes fresh juice from old riffs and harmonies.

Nothing sounds new, and yet it has no parallel in the old Alice catalog, because they were just so much weirder than we remember. 1990 debut Facelift had more Guns N' Roses than Mudhoney in it; Dirt had radio power but plenty of frightening, buried-alive difficult moments, while 1994's acoustic detour Jar of Flies played with haunted-house blues and folk. The squelchy trip of the following year's Alice in Chains simply sounded broadcast from hell itself, with a title like "Head Creeps" that wasn't even the creepiest thing on it (hiya, eight minutes of "Frogs"!), while the requisite Unplugged session got "Sludge Factory," but not "Frogs," on MTV.

As for Dinosaurs, the most interesting outlier here is somewhat of a pop song, an acoustic glam-AC/DC stomp titled "Voices." Calling it experimental would misrepresent its barren lyrical palette — "Everybody listen / Voices in my head" — but it's the first thing Alice II have done that gives DuVall his own vocal identity. It's safe to say that Staley wouldn't have done those post-chorus power-pop vocal runs. Small potatoes yeah, for a meat-and-potatoes band. But the Devil put Godsmack here to make us forget the meat.