Nirvana – With The Lights Out Review 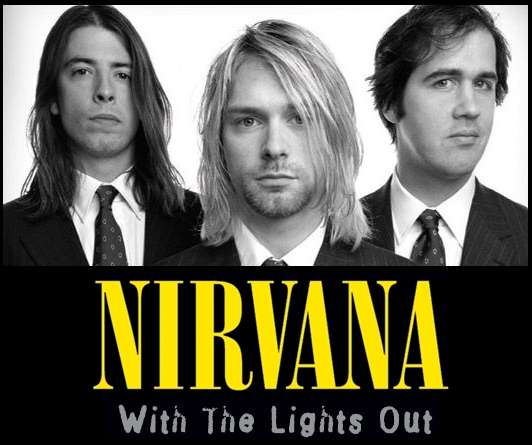 “If we did not have chemicals, you wouldn’t be writing my death certificate…” Halfway through the unreleased jam ‘The Other Improv’ – recorded at one of Nirvana’s last ever recording sessions, in Rio De Janeiro, Brazil, as they worked out the songs that would become ‘In Utero’ – Kurt mumbles a confession. But was it a tortured genius accidentally caught in a moment of emotional nakedness, or a man known for mocking the public perception of his life taking the piss? Remember, just six months previously he had appeared at the Reading festival, in what was to be the band’s final UK show, in a wheelchair and white surgical gown. So does the release of ‘With The Lights Out’ shed any new light on the Nirvana myth? Does it explain why it ended like it did? Does it add to, or take away from the cult of Kurt which has grown since his grisly suicide in April 1994?

People may have been clamouring for this stuff but, as with the recent publication of Kurt’s personal diaries, it should be questioned if many of the songs on ‘With The Lights Out’ should ever have been allowed into the public domain at all. Entire swathes of ‘With The Lights Out’ are so personal, it’s like peering into Kurt’s private journals and selfishly ripping out a page for yourself. Sometimes it’s fascinating, but over the course of more than three hours and 81 songs it occasionally feels like you’re discovering secrets better left untold.

The release last year of the ‘lost’ ‘You Know You’re Right’ was something of a red herring for those who may think that the vaults are heaving with quality unreleased Nirvana songs. ‘With The Lights Out’ features numerous different mixes and alternative versions of already famous tracks, but in terms of actual new material it’s relatively slim pickings.

But what there is here is brilliant. Highlights include ‘Old Age’, an outtake from the ‘Nevermind’ sessions which Kurt then gave to Courtney, who recorded it with Hole. Then there’s the psychedelic ‘Do Re Mi’ (known in some circles as ‘Me And My IV’), a pretty acoustic demo reminiscent of something from The Beatles’ ‘White Album’ – a song which would have been recorded and released on an EP for their aborted appearance on Lollapalooza in 1994. But, of course, the band never made the tour.

What is revealed, though, is that the way Kurt wrote songs never changed. From the earliest rehearsals in 1988, when Nirvana were playing in bassist Krist Novoselic’s mum’s house, through to ‘Do Re Mi’ (committed to tape just weeks before he killed himself), Kurt worked through his ideas and lyrics on a simple acoustic guitar, often recording on anything he found nearby – boombox, tape recorder or four-track. It didn’t matter that the guitar was flat or maybe even missing a string. Listening now, ten years later, to this DIY approach, it’s charming to think that these sketches became ‘Rape Me’, ‘Pennyroyal Tea’, ‘All Apologies’ and ‘Sliver’. But it’s often frustrating because what could have been a thrilling document of the best songwriter since John Lennon is masked behind hiss and noise.

CD1 deals with the band around the release of ‘Bleach’, when they were little more than Led Zeppelin wannabes, trying to find a unique voice and struggling against an inability to break free of their remote location, to find a good drummer, or even somewhere permanent to rehearse. There are two Zeppelin covers, in fact, on the first disc, a pretty faithful run-through of ‘Heartbreaker’ and a workmanlike ‘Moby Dick’. There are three Leadbelly songs recorded at a 1989 studio session in Seattle (predating ‘Where Did You Sleep Last Night?’ on ‘MTV Unplugged...’ by four years) and live versions of some of the best moments from ‘Bleach’: ‘Downer’ and ‘Floyd The Barber’. In truth, a lot of what’s on CD1 sets foundations for what’s to follow. Despite the fact that many of the tracks are swamped in feedback, even in the late-’80s Cobain, try as he might, couldn’t mask his love of bands like The Beatles – it comes through in the early demos of ‘Polly’ and ‘About A Girl’.

But as the decade turned, something changed. If on the early demos Cobain wanted to celebrate his heroes by covering their songs, as Nirvana developed Kurt found the confidence to embrace melody, take a song he liked and perform it in his own style. And in doing so he found his voice.

CD2 features different mixes of some of the songs which took Nirvana to the top of the US album charts and shook rock music to its core. There’s an embryonic demo of ‘Smells Like Teen Spirit’, plus alternative mixes of ‘Stay Away’ (renamed as ‘Pay To Play’), ‘Breed’ and ‘Lithium’. It’s Nirvana at their most mainstream and sugar-coated; polished pop songs that sound as fresh today as they did in 1991. But somewhere in the middle of these sits an acoustic demo. It’s of ‘Dumb’. And it’s the first real hint that Kurt’s struggling to come to terms with his success and is crippled by his addiction to heroin. It opens the door to the most harrowing moments on the entire compilation.

By late 1992 and into 1993 it’s obvious that Kurt doesn’t want to be a pop star anymore, and it’s eating away into his songwriting. CD3 opens with two different versions of ‘Rape Me’, the first on acoustic guitar, the latter with the full band. On the acoustic version there’s a child, presumably his daughter Frances Bean, screaming in the background. As Kurt sings, the screaming doesn’t die down; if anything, it gets worse. It’s impossible to say if it’s there intentionally to give the song more power, but it’s not like it’s needed.

That’s followed with a nine-minute version of ‘Scentless Apprentice’. Even against the backdrop of one of the most uncompromising albums ever, the finished version can hardly be described as one of the more radio-friendly moments on ‘In Utero’, but this is something else. Grohl came up with the drums and riff and you can almost hear him teaching them what to do. Three minutes in, there’s a wall of feedback; by four it starts to take shape. Kurt doesn’t have any lyrics; he’s searching for a melody but none comes. Six minutes in, he’s screaming his lungs out and the band just get louder and louder. It’s awesome, one of the best things on the box-set.

Then comes ‘Heart Shaped Box’. Again, completely different from the unit-shifter released as the first single from ‘In Utero’, this comes from the same sessions in Rio as ‘The Other Improv’. The guitar solo in the chorus is replaced with a wall of feedback, a metaphor for the reaction against the monster Kurt perceived he’d created. CD3 ends with an undated solo demo of ‘All Apologies’ so bleak to makes the version on ‘MTV Unplugged...’ sound like ‘Hey Ya!’ .

The DVD adds more insight, with brilliant rehearsal and live footage, from the ropey fuzz of Shocking Blue’s ‘Love Buzz’ up to the Rio studio’s strangely touching recording of insipid ’70s ballad ‘Seasons In The Sun’.

Ten years on, ‘With The Lights Out’ is the ideal last statement. With three studio albums, an unplugged, a live album, a greatest hits and now this, those close to Kurt and Nirvana have handled what must have been years of horrific decisions with true dignity. But now, there’s nothing of any quality left. Kurt wasn’t alive long enough for those around him to keep returning to the vaults time after time and finding lost gems.

Ultimately, if you’re looking for answers, you’ll get more questions. What was that reference to a death certificate about? Anything at all? Did he see himself as following in the footsteps of the bluesmen like Leadbelly? Or continuing a rock lineage that snakes back to The Beatles? Or both? And if you’re after better versions of classic songs, think again. But as a humanising, comprehensive and often heartbreaking document of a man who, in five years, changed the face of music, almost by accident, it’s essential.
Read more at http://www.nme.com/reviews/7562#ik8lZOcJP0KKdgtA.99