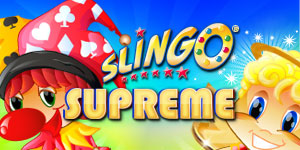 I hesitate using the word "addicting" when talking about iPhone games anymore, as it's a pretty tired cliché, but I can't think of a better way to describe the new iPhone game Slingo Supreme. I use the term “new” loosely, asSlingo itself has been around since the mid-nineties, but is new to the iPhone platform. Many gamers will probably remember playing Slingo on AOL back when your 28.8k modem was the hotness. I remember the game from back then, but somehow managed never to have played it until this iPhone iteration. The game evolved a lot since the first release from 1995, andSlingo Supreme for iPhone is based on the PC game of the same name from 2008.

There's a lot going on in Slingo Supreme, but I'll do my best to sum it up for those not familiar with the game. In essence, it's exactly what the name implies – a mixture of slots and bingo. Each game starts with a 5 x 5 board of randomly set numbers, with a row of five numbers along the bottom that changes with each “pull” of the lever, like a slot machine. The task is to match each number from the bottom row with one from the corresponding column above it. You're given 20 pulls of the lever to accomplish this task, with the ultimate goal of racking up a high score and completely clearing the board of numbers. This is Slingo at its most basic level, but there are many twists to the formula. 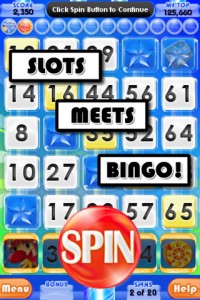 For starters, you can randomly get jokers in the bottom row which allow you to choose any number in the column to clear, or super jokers which let you clear any number on the entire board. Sometimes you'll get a devil in the row which will deduct points from you, unless you get lucky and a cupid appears to block him. This all applies to Classic mode in the game, but there is also Supreme mode. In Supreme mode, you can choose from sixteen different powerups to use, which allow for bonuses such as earning extra spins, score multipliers, mystery chests, and more. Running into a devil is also a bit different, as it allows you to wager a portion of your score in one of several mini-games against him, with the possibility of doubling your entire score should you win.

There are eight slots to place powerups in Supreme mode, and the powerups and slots are initially locked and slowly unlock as you progress in the game. In fact, the unlocking aspect is what really hooks me about Slingo Supreme. It seems like every few games you're earning a new reward of some type, and it really compels you to keep playing. Games can be played fairly quickly, and they strike a great balance between strategic and mindless. Pulling the lever and matching numbers doesn't require a ton of skill, but smart use of powerups and efficient matching can take your scores to astronomical levels.  This video shows gameplay from the PC version of Slingo Supreme, which plays exactly like the iPhone version just with a different screen layout:

In addition to the Classic and Supreme modes, there is a Daily Challenge that tasks you with earning a certain high score using the specific powerups of the day. It's a fun mode as well, but unfortunately Slingo Supreme doesn't feature any kind of online scoring, which is a feature it definitely needs. The developer has stated in our forums that online scores will be coming in an update, but until that time there are four profile save slots so you can have some same device competition with family or friends.

Even without these additions, Slingo Supreme is an engaging affair that's well worth checking out if you're a fan of the series, or even a newbie like myself who just can't seem to put it down.