A couple of years ago, casual game developer PlayFirst evolved its uber-popular Diner Dash franchise, adding actual food preparation on top of waitressing duties. The new game was called Cooking Dash, and it offered Diner Dash fans (myself included) a more challenging and ultimately more satisfying time management gameplay experience. The second Cooking Dash game didn't change much from the first game, but Cooking Dash 3: Thrills & Spills has added so many new features, it's the best Dash game to be released thus far.

If you've never played Diner Dash, the basic setup is that you're a waitress running a busy restaurant. Customers line up at the door, and you have to seat them, take their orders, deliver their food, their checks, and clean up their dishes, all while keeping them happy enough to leave you a big tip. In Cooking Dash, you still have to do all of these things, but you also have to cook some of the food as well. This gameplay may sound menial written out here, but it's also strangely addictive and has attracted an audience of hardcore high-score seekers in addition to the casual audience.

Cooking Dash 3 has upped the ante even more by adding a drive-through window (or "dash-thru" as it's called in the game) in addition to the tables in the restaurant, and requiring you to stir or flip hot food items midway through cooking in order to get the "perfect cooking" bonus. The complexity and combinations of some of the food items have also taken a big boost, with customers able to ask for lettuce or tomato on a sandwich, as well as choose a specific kind of bread, or pick between green and black olives on their meatballs, as well as pesto or tomato sauce on their pasta, for example. However, the game is split into different themed restaurants that serve different types of food, so you won't have to deal with an overwhelming amount of complexity all at once. 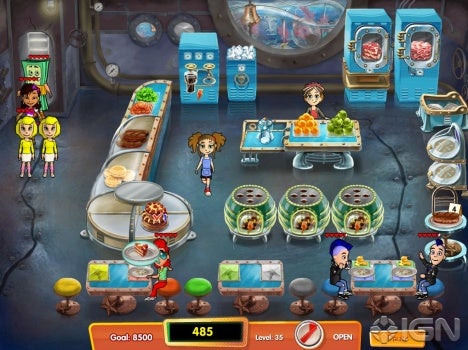 Another new addition is a quick mini-game between each level. The mini-games themselves aren't anything terribly wonderful. They involve finding specific foods amongst a clutter of other foods or catching falling food on tray, but they tie in nicely to the rest of the gameplay because whatever you earn in the mini-game is available as a precooked menu item in the next regular level. This saves you a massive amount of time and is absolutely necessary in the harder levels.

And speaking of hard, Cooking Dash 3 is a great challenge on "Casual" mode, but for the first time in a Dash game, there is an additional "Expert" mode, doubling, if not tripling the amount of time you can spend with the game. Both modes still feature the baseline goal scores and expert scores for each level, as well. Personally, I was giddy at the extra mode because it really is difficult, even for veteran Dash fans like myself.

As great as the new additions are, however, the game isn't perfect. In some of the more frantic situations, it will place certain food items together on a single plate rather than on two plates, which might have been your intent. However, this happens much less frequently than it did in previous Cooking Dash games. The addition of the mini-games in between levels was a great idea, but I would have liked to have seen more variety in the types of the games to keep things fresh.

As with all of the Dash games, there is an overarching story, but it's not terribly deep or important, and the characters remain simple cartoons even though the food looks much more sophisticated.

As more and more Dash games are released, I approach them more and more skeptically, doubting whether they can actually build upon the gameplay that I love. But Cooking Dash 3 does it, and does it wonderfully. I’ve had way more fun playing this game than I’ve had playing some console games that cost almost 10 times more. If you’re a hardcore gamer who has never tried a Dash game, I really encourage you to give Cooking Dash 3 a try. I think you’ll be pleasantly surprised at what you find. If you’re already a Dash fan, then this is a must-buy.