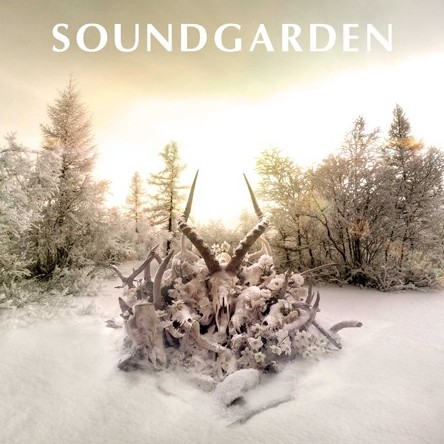 Grunge pioneers Soundgarden surprised a few people when they decided to get back together, but probably surprised many more when they announced they'd be getting off the festival circuit to write and record again. It's been a while and I'm not convinced there's ever been a truly great reunion album, so the aim for the Seattle veterans on "King Animal", their first studio outing since 1996, is to avoid a flop and reassert themselves as artists before setting their sights higher. Scepticism can be excused given some of Chris Cornell's solo work since the 90s.

Truth be told though, it doesn't take long at all to get back into the swing of listening to one of their records and this is a strong release. Opener "Been Away Too Long" has all the hallmarks of a big Soundgarden single and from start to finish the album is littered with little moments of inspiration from guitarist Kim Thayil. The exotic flavour of "A Thousand Days Before" is a particular highlight and follow-up single "Non-State Actor" is a perfect reimagination of the "Superunknown" era.

Broadly speaking though this is a more moderate (or is that mature?) effort; we're not talking soft rock here but energy levels peak very early and the focus on melody over riffing becomes more and more clear as the album goes on. Those hoping for a big bang to finish will also be disappointed but the band have traditionally closed with a mid-paced jammer, and "Rowing" plays to type. This is actually their shortest album since 1988 debut "Ultramega OK" but without some of the rockier numbers in there later on this requires a patient and dedicated listen. Worry not, though, the substance is there and it hardly takes a scholar to pick it out. // 8

Lyrics and Singing: The passage of time has inevitably impacted upon Chris Cornell's ability to soar up to the really ball-clenching highs of days gone by, but the permanent class of an experienced songwriter and iconic frontman shines through. There is a typical whiff of cynicism and pessimism in the lyrics, though it's cased in conservative language and the adventurousness of the melody is dialed down a few steps since Chris can't shriek and wail like he used to. Occasionally Thayil will move into esoteric guitar territory and disconnect with the song; when Cornelldoes the same it leaves the song lacking for impetus but these moments are the exception rather than the rule on a well put-together record. // 7

Impression: What's most refreshing about "King Animal" is that it sounds like the effort of a band who really wanted to make new music and felt like they had something worthwhile to say with it. Cornell and co could have easily half-arsed it and toured for a few more years on their incredibly strong catalogue before calling it a day, but on the evidence of this record it looks like theyâ€™ve got wind behind their sails again and will be pushing on as a fully functional recording and touring machine. This is no "Badmotorfinger" but the potential for more top drawer music from Soundgarden is greater than it has been at any point since their reunion. Highly enjoyable stuff.