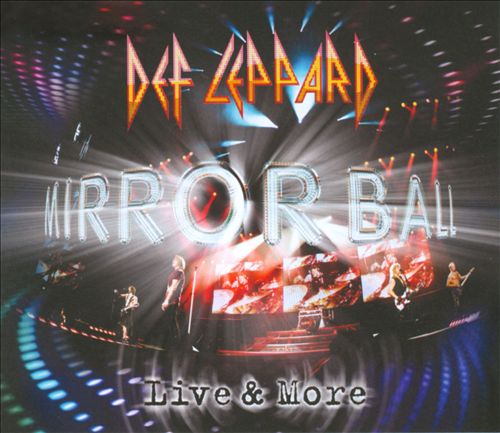 Of all the ‘80s bands that once ruled the hair metal roost, few soldiered through the following decades with as much tenacity as Def Leppard, who scored hits during the grunge era (“Let’s Get Rocked,” “Two Steps Behind”) and the late-‘90s teen pop revival (“Promises”) before quietly fading from the charts. The group then whipped itself into a touring juggernaut, spending nearly every summer on the road with AOR titans like Journey and REO Speedwagon. On Mirror Ball -- the band’s first live release, unless you count the out of print Live: In the Clubs, In Your Face EP from 1993 -- the guys are all pushing 50, yet the band doesn’t sound all that removed from its Reagan-era heyday. The biggest telltale sign that these songs were recorded during 2008’s Sparkle Lounge tour (as opposed to, say, the Hysteria heyday of 1987) is Joe Elliot’s voice, which has morphed from a metallic screech into a coarse croon. He now flips into this falsetto on the high notes, and his bandmates continue to chime in with their usual harmonies, which sound far more human when divorced of Mutt Lange’s studio production. The set list focuses on the band’s greatest hits -- “Pour Some Sugar on Me,” “Foolin’,” “Photograph,” “Love Bites,” “Let’s Get Rocked” -- and only reaches into the archives for “Switch 625” and “Bringin’ on the Heartbreak,” the latter of which is given the same treatment it received during the band’s 1980s performances: an acoustic beginning, followed by lots of audience baiting and -- finally -- an epic, electric finish. Three new studio recordings are tacked onto the end of disc two, with theQueen-like “Kings of the World” standing out as the best of the bunch. They’re all fine songs, really, but the meat of this album is the live material, which is far better than most fans will expect it to be.